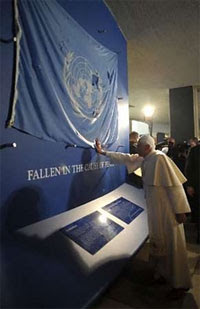 Pope Benedict XVI reaches to touch and bless a United Nations flag at the U.N. headquarters in New York April 18, 2008.

Pope Benedict XVI spoke to the U.N. General Assembly on Friday, warning nations against undermining the authority of the United Nations by acting unilaterally. The Pope also found time to bless the U.N. flag.

"Countries that act unilaterally on the world stage undermine the authority of the United Nations and weaken the broad consensus needed to confront global problems, Pope Benedict said on Friday.

The international community must be "capable of responding to the demands of the human family through binding international rules," said the 81-year-old pope, who spoke after meeting privately with U.N. Secretary-General Ban Ki-moon.

He said the notion of multilateral consensus was "in crisis because it is still subordinated to the decisions of a few, whereas the world’s problems call for interventions in the form of collective action by the international community."

The Pope’s comments are of little surprise, given the fact that he has previously called for a "new world order" to combat terrorism, environmental problems, as well as economic imbalances during his Christmas 2005 speech. Pope John Paul II also called for a new world order in a 2004 new years speech.

An interesting perspective on these comments comes from a 1970’s report called the "World Order Models Project." The report was funded by the Carnegie Foundation and Rockefeller Foundations, and was directed by Council on Foreign Relations member Saul H. Mendlovitz. Richard A. Falk, also a CFR member, contributed work to the project.

The project called for the formation of a world government complete with global taxes, a general disarmament program and the elimination of the nation state.

The WOMP project also planned on selling these globalist ideals to the world by using prominent world leaders to promote the plans and begin molding the international dialectic around globalist perceptions. The Pope was named as a possible outlet. The project states,

"Symbolic world leaders such as the Secretary General of the United Nations or the Pope might espouse [the WOMP agenda]… as a program for the future… These kinds of external developments… would initiate a world order dialectic within American politics that would begin to break down decades of adherence to [the Westphalian system] and its infrastructure of values, perceptions and institutions."

In a 1997 paper presented to the Research Department of the Air Command and Staff College, Maj. Bart R. Kessler outlined the plans of the World Order Models Project and many other globalist initiatives. His paper can be read here. Reference to the use of the Pope in promoting globalist ideology, as well as citation, can be found on page 25 of this report.

Posted by Michael Difensore at 4:30 PM

i'm always worried about the santity of the pope, i could it be proven his "dark side"§ because up to now i don't get any proof of his total sanity.