Giuseppe Mazzini A 33 Degree Freemason Started The Mafia In Italy 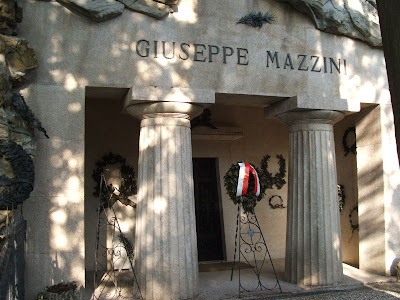 Mausoleum of Mazzini in the Staglieno cemetery of Genoa, Italy. (Notice the two pillars Masons Love Jachin and Boaz.) 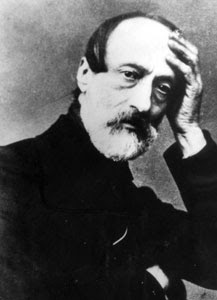 While attending Genoa University, Giuseppe Mazzini became a 33rd degree Mason, and joined a secret organization known as the Carbonari (their stated goal in 1818: "Our final aim is that of Voltaire and of the French Revolution -- the complete annihilation of Catholicism, and ultimately all Christianity."), where he became committed to the cause of Italian unity. In 1831 he was exiled to France where he founded the 'Young Societies' movement which included Giovane Italia (Young Italy), Young England, etc. This group united those who wanted to achieve unification through force. Mazzini moved to England in 1837 then returned to Italy in 1848 to lead the revolution against the Austrians. Again he was exiled. In the 1850's he led more revolutionary activities, and through his actions Italy became united in 1861 as a single kingdom rather than the republic envisioned by Mazzini. Mazzini, who became known as the 'Evil Genius of Italy,' tried to carry on the activities of the Illuminati through the Alta Vendita Lodge, the highest lodge of the Carbonari. From 1814-48, the group known as the Haute Vente Romaine led the activities of most of Europe's secret societies. In April, 1836 the head of the Haute Vente, whose pseudonym was 'Nubius,' wrote to 'Beppo': "Mazzini behaves too much like a conspirator of melodrama to suit the obscure role we resign ourselves to play until our triumph. Mazzini likes to talk about a great many things, about himself above all. He never ceases writing that he is overthrowing thrones and altars, that he fertilizes the peoples, that he is the prophet of humanitarianism..." In 1860, Giuseppe Mazzini had formed an organization called the 'Oblonica,' a name derived from the Latin 'obelus', which means: "I beckon with a spit (dagger)." Within this group, he established an inner circle called the Mafia. About 1000 A.D., after the Normans had driven the Arabs out of Sicily, they established a feudal system. Overseers to guard each feudi were chosen from known criminals. Skirmishes between the Barons were fought by these criminals. Although feudal privileges were abolished in 1812, these overseers retained control of the land through leasing arrangements. It was this band of criminals that Mazzini gave the name 'Mafia', which was an acronym for Mazzini, Autorizza, Furti, Incendi, and Avvelengmenti. Known as the Mafiosi, they were authorized by Mazzini to commit thefts, arson and murder. It was this organization that came to America during the 1890's with the beginning of Italian immigration.

A Diabolical Plan, or A Wild Prophecy?

Source: endrtimes.blogspot.com
Cardinal Caro Y Rodriguez published The Mystery of Freemasonry Unveiled in 1925. Rodriguez names several references for a particular letter written by Albert Pike in 1871 suggesting a plan of universal destruction, one of which is Le Palladisme : Culte de Satan-Lucifer dans les Triangles Maconniques by Domenico Margiotta which I quote on the front page of this website, and which I believe indicates that Pike did indeed write something of that nature. Rodriguez alleges that on 15th August 1871 Albert Pike proposed the following plan in a letter to Giuseppe Mazzini. The quoted text below lays out a plan for three world wars ending with Luciferian World Government. WW1 occured as proposed by Pike. WW2 occured as proposed by Pike. WW3 is looking like it will occur as proposed by Pike.

"The First World War must be brought about in order to permit the Illuminati to overthrow the power of the Czars in Russia and of making that country a fortress of atheistic Communism. The divergences caused by the 'agentur' (agents) of the Illuminati between the British and Germanic Empires will be used to foment this war. At the end of the war, Communism will be built and used in order to destroy the other governments and in order to weaken the religions.
The Second World War must be fomented by taking advantage of the differences between the Fascists and the political Zionists. This war must be brought about so that Nazism is destroyed and that the political Zionism be strong enough to institute a sovereign state of Israel in Palestine. During the Second World War, International Communism must become strong enough in order to balance Christendom, which would be then restrained and held in check until the time when we would need it for the final social cataclysm.
The Third World War must be fomented by taking advantage of the differences caused by the 'agentur' of the 'Illuminati' between the political Zionists and the leaders of Islamic World. The war must be conducted in such a way that Islam (the Moslem Arabic World) and political Zionism mutually destroy each other. Meanwhile the other nations, once more divided on this issue will be constrained to fight to the point of complete physical, moral, spiritual and economical exhaustion.
We shall unleash the Nihilists and the Atheists, and we shall provoke a formidable social cataclysm which in all its horror will show clearly to the nations the effect of absolute Atheism, origin of savagery and of the most bloody turmoil. Then everywhere, the citizens, obliged to defend themselves against the world minority of revolutionaries, will exterminate those destroyers of civilization, and the multitude, disillusioned with Christianity, whose deistic spirits will from that moment be without compass or direction, anxious for an ideal, but without knowing where to render its adoration, will receive the true light through the universal manifestation of the pure doctrine of Lucifer, brought finally out in the public view. This manifestation will result from the general reactionary movement which will follow the destruction of Christianity and atheism, both conquered and exterminated at the same time."

So who were Albert Pike and Giuseppe Mazzini?

Albert Pike was an attorney, military general, a 33rd Degree Freemason and author on Masonry, and was considered a genius. Pike wrote Morals and Dogma which was given to every member on entering the 14th Degree of the Ancient and Accepted Scottish Rite of Freemasonry. He was asked to help divide the USA by using slavery in preparation for the Freemason-engineered civil war of 1861. He was also investigated regarding the assassination of Abraham Lincoln and pardoned for his role by President Andrew Johnson. Pike's tomb is in the House of the Temple, the HQ of the Ancient and Accepted Scottish Rite of Freemasonry whch is 13 blocks north of The White House.
Giuseppe Mazzini was also a 33rd Degree Freemason, a British Intelligence agent, a revolutionary terrorist, and founder of Young Europe, a network of revolutionary groups designed to cause chaos around the world, which eventually grew to include Young America, Young Russia, and Young Bosnia, a fact which will become very significant regarding World War 1.
So we are talking about two powerful men with access to the corridors of power, access to the whole freemasonic network, and access to the occult underground.
What you must understand is that what Pike proposed was not some fantastic act of prophecy made at a party for some fun after a couple of bottles of claret.

Posted by Michael Difensore at 8:29 PM

This kind of information is very limited on internet. Nice to find the post related to my searching criteria. Your updated and informative post will be appreciated by blog loving people.

Thanks for the information.It will be supportive to anybody who utilizes it, including myself.Hoping more posts from you.Sinus headache