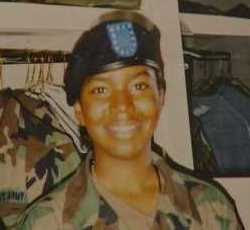 New LaVena petition to Congress and the President

As you will recall, the original LaVena Johnson petition to the Armed Services Committees of the House and the Senate - asking those bodies to compel the Army to reopen the investigation of LaVena’s death in Iraq - closed on May 23. I’m currently arranging with an organization for delivery of the petition to the legislators on those committees.

For the many people who have recently heard of LaVena’s story and are looking for ways to help, activist Danielle Vyas has launched a new and separate petition effort on the Care2 network (also noted by Bruce Combs in comments). The Justice for LaVena Johnson petition is addressed to both houses of Congress and President Bush. Danielle’s goal is one thousand signatures; after a full day, the count currently stands at 108.

I am very grateful to Danielle for sponsoring this new petition. I’ll add my own name to the list today. This effort belongs to no single person; the more voices that can be raised in support of the Johnson family, the better.

According to the U.S. Department of Defense, Private LaVena Lynn Johnson killed herself on July 19, 2005, eight days before her twentieth birthday. Exactly how did she end her life? She punched herself in the face hard enough to blacken her eyes, break her nose, and knock her front teeth loose. She douched with an acid solution after mutilating her genital area. She poured a combustible liquid on herself and set it afire. She then shot herself in the head. Despite this massive self-inflicted trauma, she somehow managed to drag her then fully clothed body into the tent of a KBR contractor, leaving a trail of blood along the way and set the tent ablaze in a failed attempt to cover up her crimes against herself.

If this story sounds plausible to you, you may have missed your calling as an officer in the U.S. Army, because Army officers, speaking with a straight face, would have you believe that such a thing is not only possible, but actually happened.

In reality, LaVena Johnson was raped, beaten, and murdered by someone on a military base in Balad, Iraq, and the Army doesn’t want you to know about it. Army officers most especially didn’t want her parents to know about it, so they concocted the suicide story, informing them that their daughter had shot herself in the head in her barracks.

When LaVena’s body was returned to her parents, however, her father, Dr. John Johnson, immediately noticed that her nose was broken and her lip was torn. He was surprised to discover that her gloves were glued to her hands (as it turns out, to hide burns). As a former military man himself, he also recognized that the exit wound from the bullet could not possibly have come from the weapon the military claimed LaVena used to kill herself. He knew then that the Army was lying to him, that his daughter had been murdered. He made these discoveries three years ago. Today, the Army is still lying to him, and to us.

LaVena Johnson enlisted in the U.S. Army after graduating from a Missouri high school because she believed it was right to serve her country. She loved America, was very patriotic, and she thought joining the military was the best way to express that patriotism. Although her mother had assumed that her daughter, a violinist and honor student, would go straight to college, LaVena had made other plans. After her death, her company commander described her as having been “clearly happy” during her time in the Service. She enjoyed her job, took pride in it, and cared about the U.S. Army.

Unfortunately, the Army did not care about her. In fact, the disdain and contempt in which the Army held – and continues to hold – her seems to have no bounds. Her father stated last year in an interview given for a Missouri television station that the U.S. Army “turned on her” after her murder. I differ with Dr. Johnson on only one point: the U.S. Army never did give a damn about his daughter.

After filing a FOIA request for release of a CD-ROM contained in LaVena’s file but withheld from the family for over two years, and under added pressure from a congressman, the Army finally gave the Johnsons the CD. On it they found horrific photographs from the autopsy that clearly showed the extent of their daughter’s injuries. It proved that the original black and white photos of LaVena’s body originally sent to them had been doctored. Also on the disk were damning sketches of the crime scene that gave her parents further information contradicting the Army’s statements.

In a heart-wrenching interview conducted last month with LaVena’s parents, her mother, Linda Johnson, describes the members of the military responsible for this cover-up as “lying demons.”

According to the Department of Defense FY07 Report on Sexual Assault in the Military,

“The Army remains committed to thoroughly investigate and take appropriate action in all unrestricted reports of sexual assault,” and the Department of Defense “continues its commitment to eradicate sexual assault in the military services.”

Military leaders have no real interest in stopping sexual assaults. If they did, LaVena Johnson’s rape and murder would be included in their statistics. But they would rather not admit that these crimes occur if they don’t have to. So, if the victim is dead, all the better. Just report that death as a suicide.

LaVena Johnson was awarded a posthumous promotion to Private First Class, a bone thrown to her family, no doubt. But her spirit cries out for justice. Please call your representatives in Congress and demand action on her case. The telephone number for the U.S. Capitol switchboard is 202/224-3121. Please help her parents to obtain a proper investigation of their daughter’s death. The major media have ignored LaVena’s story, and without a vociferous public demand for action the government will continue to stonewall.

LaVena Johnson was raped and murdered. Do not let the military sweep this under the rug.

Posted by Michael Difensore at 6:52 AM

I like your layout, the fact that your webpage is definitely a tad bit unique makes it so useful, I get utterly fed up of viewing the same stuff nearly all of the time. I’ve I simply found this site by you Thanks a lot.

I like your structure, the fact that your webpage is actually a tad bit unique makes it so useful, I get completely fed up of viewing the identical stuff just about all the time. I’ve I just came upon this site by you Thanks a lot.